According to the Association of Zoos and Aquariums (AZA), there are 135 zoos in the United States alone and another 79 in other countries represented by the AZA. There are approximately 800,000 animals in the care of AZA-accredited zoos and aquariums, with 6,000 species represented. Zoos contribute more than $22.5 billion to the US economy and serve almost 200 million annual visitors. Zoos also house 1,000 types of threatened or endangered species, making them an important player in species preservation, and they facilitate the breeding of these endangered animals so that their population may increase. A zoo misting system can help a zoo achieve its main objective of keeping animals happy and healthy.

Maintaining animal health is a top priority for zoos. Serious health problems can arise if animal’s habitats are not kept in perfect balance. Particularly in warmer areas, heat can pose a serious problem. When zoos decide to take on the care of non-native animals that require specialized climates such as polar bears or snow tigers, they also accept the responsibility of keeping these animals’ in a safe environment. To combat heat, zoos have come up with many solutions, from air conditioning habitats and providing large bodies of water, to more creative measures such as feeding animals “blood pops” with their favorite treat frozen in ice. However, these solutions are not always practical or feasible, especially in larger, outdoor environments. Installing a zoo misting system to bring an animal habitat in balance is a perfect solution to the problem.

The process is this. Operating at pressures of 1000 psi+ Koolfog produces micron-sized water droplets that, while evaporating and turning to vapor, remove heat from the air, cooling the surrounding area. The dry fog produced by a Koolfog system reduces outdoor temperatures by as much as 35 degrees Fahrenheit, which makes even 100+ degree days comfortable. Each zoo misting system is customizable and can be expanded to fit large animal enclosures or kept minimal to target specific areas of an animal habitat. Our systems have been proven to help keep animals safe and comfortable, even in extremely warm temperatures.

For species who are native to rainforests, a zoo misting system helps provide the environments that they thrive and helps them feel more comfortable. Other animals simply require the humidity provided by a misting system. At the National Aviary in Pittsburgh, Pennsylvania, Koolfog was included in the bat habitat. Some bat species live in tropical, humid climates, so the Aviary needed to replicate this environment habitat to provide the most comfortable, naturalistic setting for their bats to thrive. Kurt Hundgen, the lead on the project, said “We decided to commit to a Koolfog system because we heard they were the best.” Koolfog was included to precisely raise the humidity level in the habitat and the Aviary has been very pleased with the results reporting that the bats have enjoyed the restorative “spa treatment” for their wings. 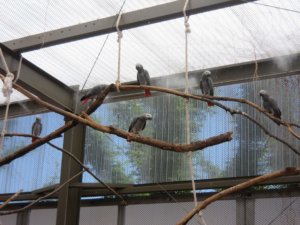 Keeping animals healthy is not the only benefit of a Koolfog zoo misting system. Providing misting in an animals’ habitat can draw them out of areas where they might choose to hide from the sun, out of sight. Strategically placing outdoor misting systems draws the animals out of the caves and crevices and makes them more visible to visitors. They are usually more playful and interactive because they are comfortable. Visitors will delight in the chance to see the animals up close and personal.

It’s not only the animals that require cooling when it is hot. Zoo visitors also require shade, water and areas where they can escape the heat. Zoos who are focused on guest comfort and developing repeat customer visits place misting systems in common areas including dining areas, observation decks, and queue lines. Since repeat visitors are a huge revenue source for zoos, particularly season ticket holders, guest comfort remains a priority considering a competitive landscape that includes other entertainment and educational venues. With zoos relying on ticket sales and special events, Koolfog represents an important piece of the overall picture so that the environment is perfect for people and animals alike. 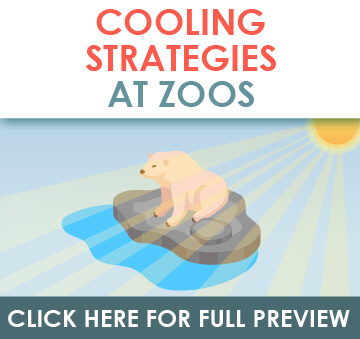 Fill out my online form.

Fog effects help cool the animals as they play.