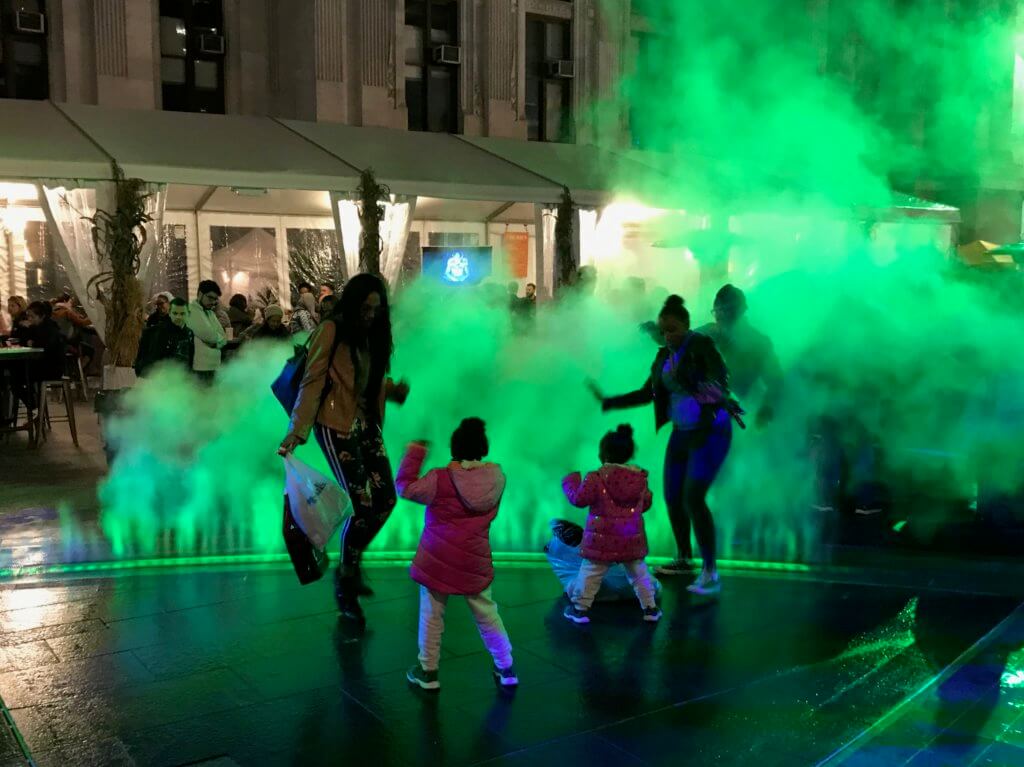 The sculptural water feature at the heart of Dilworth Park, Philadelphia is a permanently installed public work of art that compliments the landscape environment while attracting visitors to its vibrant center. Aptly named Pulse, artist Janet Echelman’s exhibit was inspired by the history of the location and its association with water and transportation.  Surrounded by a beautiful lawn area, grove seating and an adjacent café, the 11,600 square foot fountain features mist and colored lighting to represent the city’s transportation system and express its rhythm.

Pulse is a multi-sensory experience that showcases an interactive scrim fountain programmed to release clouds of mist and fog in a programmed sequence that coordinates with the site’s transit lines. Using cutting-edge evaporative cooling technologytechniques to deliver , atomized water particles and compressed airwithin a linear air curtain, the fog effect releases approximately three feet of mist in a pattern that moves along a grated pathway illuminating train arrivals and departures.

Koolfog , Inc. teamed with Studio Echelman, Center City District commission, CMS Collaborative, Arup Lighting and 1212 Studio to bring “Pulse”Pulse to life. According to Echelman’s website, “Pulse”Pulse utilizes a high-pressure misting system … of specialized pumps that create an ultra-fine, fog-like, cool mist that quickly evaporates. The ephemeral mist is made of filtered, softened water onto which lighting is projected so it is completely safe for children to play in. Described by the artist as “a living X-ray of the city’s circulatory system,” the vibrantly colored mist curtains move across the fountain and mirror the footprint of the trains below, evoking the steam rising from the city’s first water pumping station that was located on the site at the beginning of the 19th century, as well as the steam from the trains at the Pennsylvania Railroad Station that were across the street.” (echelman.com)

Koofog began working on the Pulse project in October of 2012.  It was extremely important for our team to maintain the authenticity of the artist and the fountain designer’s vision while striving to create the highest quality delivery of the linear fog curtain. Working with a conceptual design, our engineers developed a small-scale prototype that was tested using the pump, air delivery system, fog nozzles and baffles that were eventually sized to the real implementation. Once the technology accurately reflected the desired fog effect, we built a larger-scale sectional mockup replicating a trench with grating that was representative of the “railway station intersection lines”. The success of our testing phase produced technical specifications and drawings for implementation and construction purposes. As “Pulse” became a reality, Koolfog was commissioned for services on-site in collaboration with the greater “Pulse” development team to ensure proper integration of the water feature and fine-tune the fog effects. After almost six years working on Center City District’s Dilworth Plaza sculptural project, “Pulse” was officially, unveiled in September 2018.